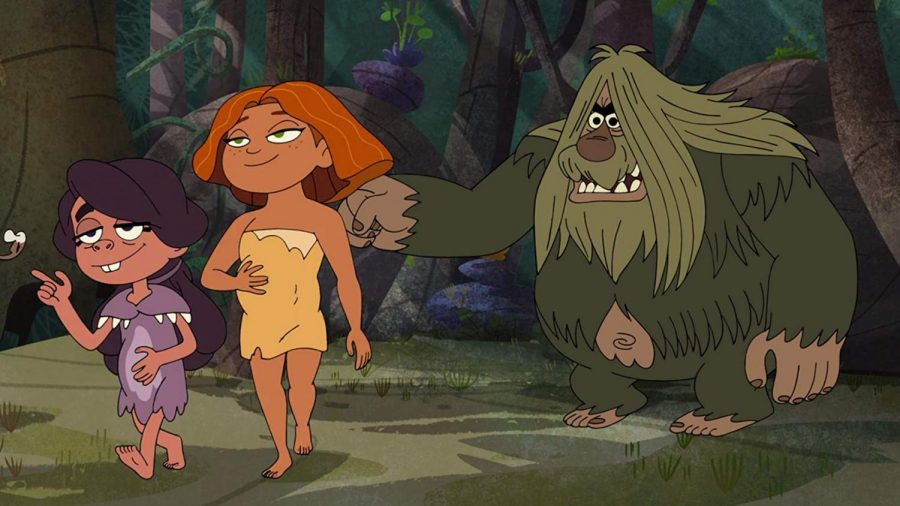 When “Croods” came out, it was a hit caveman movie. Now, “Dawn of the Croods” has been released as a Netflix series.

“Croods 1” was about a caveman family called the Croods. In the beginning, they spend most of their time in their cave. Then they meet another human called Guy. Guy leads them to survive the dangers of continental drift.

Grug is the dad, and he is a good hunter. He is protective of his family. Uga is the mom who keeps the baby Sandy safe from trouble. Gran, the grandma, is very annoying to Grug and is a very skilled hunter-gatherer. Eep is the daughter. She also helps with hunting and she is the Crood who discovered Guy.

The afternoon of the day they met Guy, Eep tried to escape from the Crood family cave. Thunk is the brother, who is slow, strange, and in “Croods 1” when Guy explains what a brain is, Thunk admits he doesn’t have one. Sandy is the baby in the family who is like a predator because everything she sees she attacks, even her own family members. Once in “Croods 1,” Grug said, “Release the baby!” when they were on a chase to try to get an egg from a duck-like animal so they can eat it.

“Dawn of the Croods” is about what happened before the first movie when there were other cavemen/humans. There are also a lot of animals that definitely did not exist during caveman times. Also, the animation looks different from “Croods 1.”

In the TV series, there are a lot of new places in their valley, which is called AH valley. They go on adventures. They meet new people and try new things. There are many places civilization today might have like a vegetable garden, a hall of comedy and even a school.