Fifth grade finds out if Constitution Works (from our print edition) 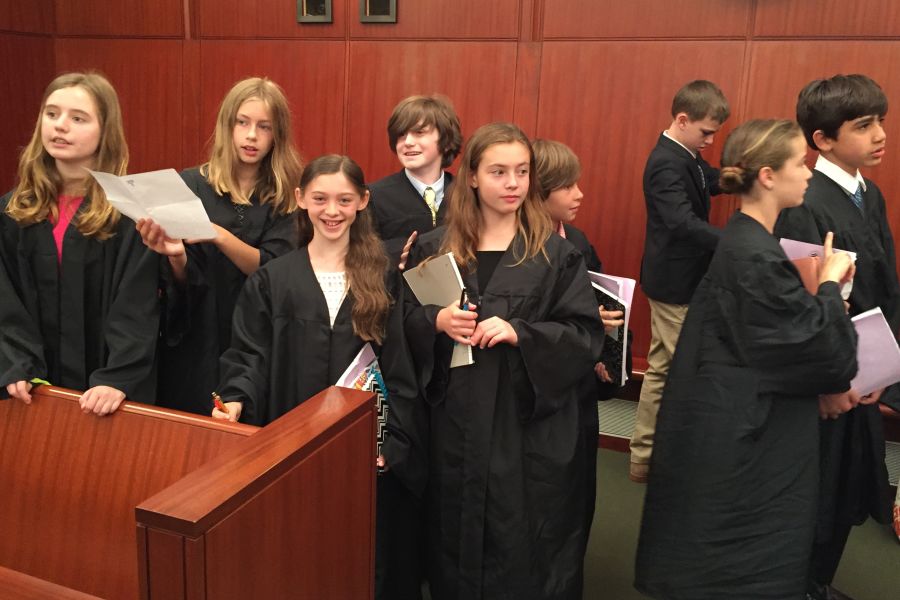 Supreme Court Justices were robbed and ready to hear the arguments.

COLONIAL — The fifth grade students went to the federal courthouse in Brooklyn June 9 to hold a mock trial of a First Amendment case, the Denver Dispatch vs the United States, as part of a program called Constitution Works.

The case involves a pretend newspaper that wrote about a secret government facility called Boulder Laboratory. The government sued the newspaper to stop publication of the stories. The government won in federal district court and U.S. appeals court. The newspaper appealed to the U.S. Supreme Court, and that was the case the students argued.

Two different sets of students argued the case in two federal courtrooms. The grade was split up into lawyers for the Denver Dispatch, lawyers for the government and Supreme Court justices.

Each group of attorneys had met in school to prepare their arguments for the court. Part of the preparation included reviewing fictional articles created for the mock trial as well as information on actual First Amendment cases.

After the case (and our presstime), the justices were to meet in school to decide who won the case.

In interviews before the field trip, students were anxious and excited.

Eric Mangelsdorf, who was a justice, said he was excited about the trip and was looking forward to hearing a good argument.

Claudia Hertwig, who argued for the United States, said she was excited but nervous.

Matthew Michailoff, who was a chief lawyer, said he thought it was cool that he was in charge and was going to a real court.