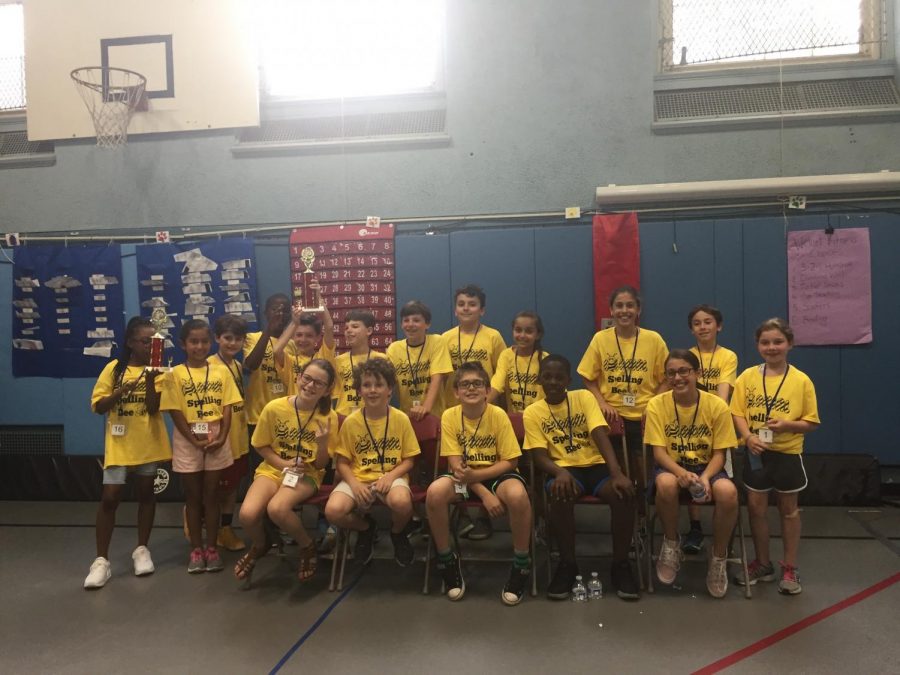 By Lark Martin and Sabine Bushong

COLONIAL GYM — At the First Annual Colonial Spelling Bee, third grader Evan Kaplan walked away with the first place trophy for the fourth and fifth grade division. Among the second and third graders, Jake Boyle won.

The bee was sectioned into two groups, the second and third graders, and the fourth and fifth graders.  Evan was in the older division because he wanted a challenge. The lower grades had easier words like maybe, trail, rules, sandbox, hitched and janitor. The older group’s list included gnarled, botany and umbrella.

“It was really fun, and I got to work with my friends,” said contestant Luigi Di Cristofano.

“I enjoyed the bee,” said Evan. “I was nervous in the beginning, but I was more confident by the end.”

“I was surprised,” said Jake after he won first place in his division.

At the bee, snacks and waters were provided for the audience and the contestants. There were munchkins, cookies, different kinds of brownies, muffins and mini cupcakes.

Mr. Coto-Chang said, “I have not been a judge before. The best and worst (parts of the bee were) the intention to spell words wrong and watching a kid spell a word without stopping for a second.”

During the brief intermission, word pronouncer Rich Zahradnik told a small story about his journalism career in college. He failed the spelling test required to qualify for an interview and didn’t get a fancy journalism job. Afterward, he got another job and “learned more about journalism and writing stories there than I would ever learn in my life” at the first position.

“I enjoyed getting third place,” said Reese. “And the munchkins. The hardest word I did was ‘hitched.’ I wouldn’t do it again because of all the pressure.”

Cole De Domenico said, “I enjoyed the bee because a lot of people joined the spelling bee to learn from their mistakes.”

The three top people in the upper division went to the Siwanoy School gym to compete in the districtwide bee against all the other Pelham schools and sixth graders. It took place on Wednesday, May 9. Julia Findikyan got fourth place, her sister Kira Findikyan won third place, Evan Kaplan took second place, and sixth grader Milan Otundi won the competition.

“I enjoyed the bee because it was competitive and fun,” said Dario Morovic.

Jonathan Magambo said, “I enjoyed the bee because if you lose, you get to see your friends win. I would do it again because it was fun and exciting.”

“In my experience, the spelling bee has been an amazing opportunity to increase vocabulary, and overall learn more,” said Kira.

The spelling bee participants met every Friday and practiced some of the words and were given games to help them study. Ms. Angela Monteleone and Mrs. Alaura Stivala, both Colonial teachers, worked with the kids every week and supported them through everything.

“It’s very exciting to start the Colonial Spelling Bee,” said Mrs. Kristina Findikyan, the Colonial parent who organized the event. “I think it is a great opportunity for the children, and I’m so proud of everyone who worked very hard.”