Maccabeats bring their a cappella beat to Sinai Free event 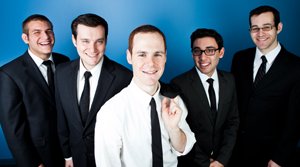 MOUNT VERNON — The Maccabeats performed a fundraiser for Gilda’s Club on April 3 at Sinai Free Synagogue, singing Journey’s “Don’t Stop Believing,” “Waving Flag,” “One Day,” and there own “Purim Song” and “Candlelight.”

Four years ago, a few students who liked to sing met at Yeshiva University, so they decided to start an a cappella group. And more students joined. There were five in the beginning and now there are 14. In November, the Maccabeats decided to post a video on YouTube, and everyone loved it.

“We plan to write more songs, and we’re working on another CD,” said Nachum Joel, one of the singers.

Susan Khan booked the Maccabeats to come to Sinai Free Synagogue, but the fundraiser itself was for Gilda’s Club. The late Gilda Radner wanted everyone who has cancer and their friends and family to have a place with both emotional and social support. Ms Radner found lots of cancer-support communities out west, but when she lived in Connecticut, there weren’t any. When Ms Radner died of cancer, her friends and family created Gilda’s Club.

The music was amazing, enough for an encore, and there was food and tons of people, which means lots of money raised for Gilda’s club. They sold CDs and t-shirts in the lobby, and the Maccabeats themselves posed for pictures and signed t-shirts and CDs.