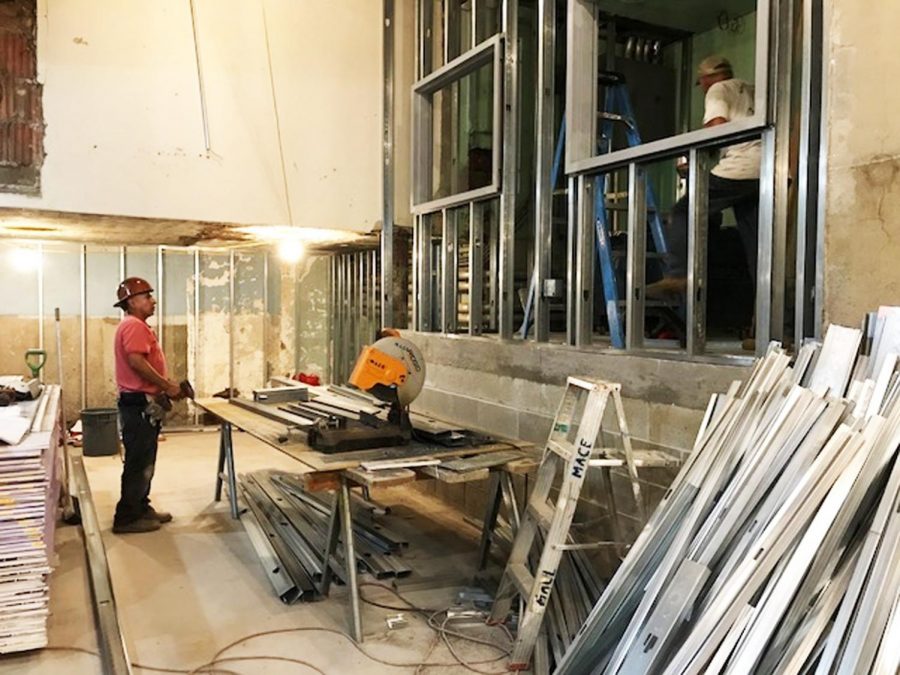 Renovated locker rooms have been considered a necessity for a while. Now, funded by a grant from the State Education Department, Pelham Memorial High School students will soon have brand new locker rooms with all new fixtures and, for the first time, air conditioning. While it may seem like renovating the PMHS’ locker rooms is a no-brainer, the process has proved to be a challenging one. What seemed to be something that could be reconciled quickly has stretched into an ongoing project that will, in the end, have lasted a full year.

The school conducts a building condition survey every five years. On the most recent survey, officials discovered several systems in the locker rooms were no longer satisfactory.

“We’ve renovated a lot of the school, but the locker rooms have been that way for a long time,” said Mr. Mandile, head of facilities in the district. “It was dingy and depressing.”

The first step in beginning this renovation project was to contact the State Education Department of New York and request a budget. After sending a request in December of 2016, PMHS was placed in a waiting queue and didn’t receive approval until the final week in June of 2017.

As Mr. Mandile said, “If things had gone the way we were hoping they would, you guys would have been able to use the locker rooms at the beginning of this year.”

Once the plans were finally approved, PMHS sought bids from competing contracting companies, with the winning bid being awarded to MACE Contracting in New Rochelle.

Construction began shortly after the end of the 2016-2017 school year. The construction started at a brisk pace, but was hampered when a structural wall was taken down that endangered the stability of the ceiling.

Though there were no notable damages caused by this error, it set the project back further, and added increased costs to the project.

This summer brought new incidents that needed to be addressed by the contractors. Heavy rains that fell while the girls’ locker room was under construction, leaked into the main gym. Because the locker rooms were constructed so long ago, the blueprints didn’t show the location of a storm drain that was punctured when the contractors removed the existing slab.

Mr. Mandile commented, “You don’t really know these things until you start taking things apart,” in response to the incident involving the storm drain.

The pipe reportedly burst and leaked all the way into the lower cafeteria. Consequently, the floors had to be replaced in Cafeteria C as well.

Barring any more unforeseen incidents, the locker rooms should be ready by early 2018.